Spring is in the air and to celebrate the new season we have launched two new great value hampers to fill your freezer and fill your stomach. There is a €50 hamper which not only includes sausages, bacon, chicken and puddings but also a few of our delicious speciality products, such as Sliabh Luachra beef and North Cork Pancetta. The €100 hamper contains a huge amount of meat including high quality steaks, pork, chicken, sausages and rashers.

Last week McCarthys were awarded a Gold Medal for their creamy new black pudding, at the annual awards organised by La Confrérie des Chevaliers du Goûte Boudin, or the Brotherhood of the Knights of the Blackpudding. These are people who really know their puddings. This is the first gold medal won by an Irish establishment.

Don’t miss this week’s RTE guide which contains a fantastic recipe pull-out. Along with many other tasty recipes, it features Kate O’Tooles dish with McCarthy’s Sliabh Luachra Beef. 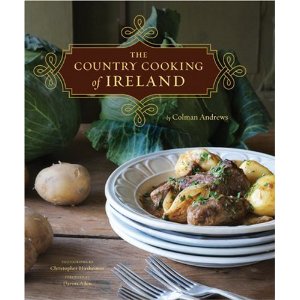 Jack McCarthy was at the launch of Country Cooking of Ireland by Colman Andrews. Jack impressed Colman with his award winning spiced beef which is cured with guinness and cider. This new cook book is both big and beautiful with wonderful recipes. Colman Andrews is one of America’s leading food writers. The launch was organised by Good Food Ireland and was attended by many of Ireland’s leading quality food producers. Also at the launch were Darina Allen, John McKenna, Myrtle Allen, Peter Ward, food writers and politicians. McCarthy’s are mentioned in the book in the artisan section. If you have been trying to re-create the meals you loved at your Granny’s house this is the perfect book to own and is available to buy online from Good Food Ireland.

A Real Treat for the Embassies

Another great accolade this month was that McCarthys Dry Cured Gammon, Roast Beef and Spiced Beef were sent to every Irish embassy in the world on Paddy’s Day by Sheridans Cheesemongers in the Government’s Official Hampers. 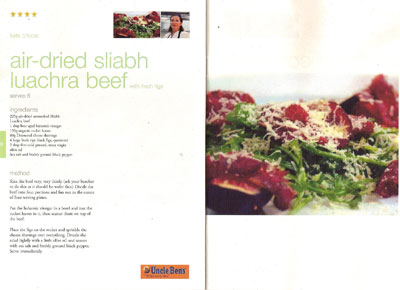 Having been thrilled with Kate O’Toole using McCarthy’s fabulous Sliabh Luachra Air Dried Beef on “The Restaurant”, it was a further privilege that the recipe was in this week’s RTE Guide.

Slice the beef very, very thinly (best get this done with a proper butcher’s slicer as it should be wafer thin). Divide the beef into four portions and fan out in the centre of four serving plates.

Put the Balsamic vinegar in a bowl and toss the rocket leaves in it, then scatter them on top of the beef.

Place the figs on the rocket and sprinkle the Desmond cheese shavings over everything. Drizzle everything lightly with a little olive oil and season with freshly ground black pepper. Serve immediately.

This recipe and the images used on this page are from the RTE website and you could originally view it here: http://www.rte.ie/food/2009/0113/airdriedbeef.html