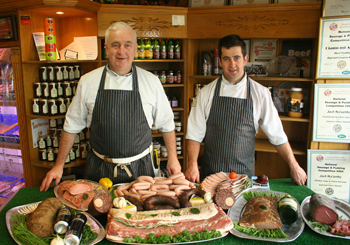 McCarthys Butchers of Kanturk use traditional techniques and innovative new ideas and have become one of Ireland’s most prominent and celebrated meat producers.

Jack and his son, Tim McCarthy, the fifth generation of butcher in the family to run the shop, are well known for their value-added beef and pork products. The McCarthys bacon and rashers have won international awards and the blackpudding has received acclaim from the Brotherhood of the Knights of the Blackpudding and was even served to the queen at the banquet on her visit to Ireland in 2011.

McCarthys work with Mary Daly to ensure that the highest standards of hygiene and training are maintained. Mary Daly & Associates have 25 years experience as trainers and consultants to the catering industry. This unique experience & knowledge along with quality service has made the company an accredited leader in the field  of catering consultancy & training.

“McCarthy’s look like a normal butcher’s shop in a normal Irish town.  It’s no such thing. Cherrywood smoked beef. Duhallow lamb sausage. A member of the Brotherhood of the Black Pudding. Whiskey dry-cured rashers.  See what we mean about not being a conventional butcher’s shop? Where else would you see meat treated with such fiendish imagination? Tim is the 5th generation of the family to have taken up the butcher’s apron so McCarthy’s allies contemporary nous and know how with more than a century of family tradition. And they are always striving to make something new, to take modern ideas and marry them to the best meat they can source. And now, with an online shop, you don’t have to make the pilgrimage to  Kanturk to get your hands on these exhilarating exciting foods.  Unique.” 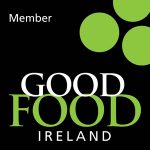 McCarthy’s are proud to be members of Good Food Ireland. It operates as a not-for-profit, industry driven Irish food tourism organisation. Through our membership we have extended our reach to new customers and made new contacts and friends within this vibrant network.  Good Food Ireland strive to promote local artisan producers, which is what McCarthys have prided themselves on being during the last three centuries, over five generations. 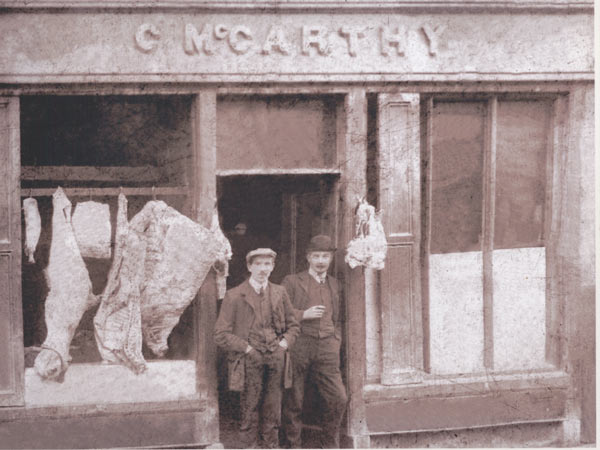 Back in 1892 Callaghan McCarthy was an accomplished local baker, but, after getting a poor cut of meat in a local butcher, he saw a niche in the market for quality meat and decided to change career. He put away his dough hook and replaced it with a set of butchers knives, joining the victualers of the world.

Butchering was as hard a profession in the 1890s as it is now, but Callaghan was fortunate to have the help of his son, John, in establishing the business. John eventually took over the business in 1920.

Tim Joe McCarthy was the next McCarthy to take over the family business. One of Tim Joe’s first jobs was to licence the premises under new, more stringent, regulations. McCarthy’s Butchers has always maintained the highest possible standards of meat and hygiene. Tim Joe was the first of the McCarthys to win a national award for his produce.

Jack McCarthy has a holistic approach to Food Safety-literally from farm to fork.

Not alone does he know his suppliers but he knows the farmers & the land that produce the quality meats he stocks. He has his own registered abattoir at Kanturk. Traceability at McCarthy meats is not just about batch numbers but honest relationships built on long association & trust.

Jack McCarthy’s shop is registered with Health Service Executive and is audited on a regular basis by the local environmental health officer. His abattoir is also approved and audited by veterinary officer of the Dept of Agriculture.

Jack consults with Mary Daly, one of the leading, national food safety professionals.

In operation is a Food Safety Management System based on the principles of HACCP.
In addition McCarthy Meats are one of only six Butchers nation wide to be selected & approved by Bord Bia Quality Assurance Scheme for Retail Butchers.

Finally, Tim has sought approval from the Coeliac society Of Ireland for his Gluten Free Sausages and will be part of their 2010 Manufactured Products List.

McCarthy meats not alone continuously strive for higher standards but actually set the standards for themselves & others!

Kanturk is the capital of the ancient barony of Duhallow, which covers approximately 1500 sqkm of North Cork, a larger area than county Dublin. The name Duhallow derives from the river Allow, which is a tributary of the famous river Blackwater, and is purported to mean “River of Swans”. Kanturk is a market town and is situated the junction of two of the Blackwater’s tributaries, the Allow and the Dallow.

Duhallow is a predominantly rural community. There are many acres of forestry, beautiful rolling hills and wonderful fresh air that blows from the Atlantic and the mountains of Kerry to the west. The terroir of Duhallow is more fertile, tree-covered and green than the rocky mountains of neighbouring Kerry or West Cork.

Kanturk, or Céann Tuirc, translates as the head of the boar. Wild boar roamed Duhallow until the 17th Century, living largely from the fruits of the extensive forestry; acorns, crab-apples, hazel and roots. The last Irish wild boar was reputed to have been killed in Kanturk and a plaque marks the spot at junction of Strand Street and Catherine’s Lane. The wild boar is commemorated in a lively festival every summer.

Kanturk Castle was built for MacDonogh McCarthy, Lord of Duhallow, at the end of the 16th Century. Known as “The Old Court” the castle is reputed to be the finest built by a celtic family in Ireland. It was never besieged or damaged by cannons. The castle was built at a time of peace and in a beautiful, but not strategically important, location.

MacAuliffe, seer and step-brother of MacDonogh predicted that the castle would never be completed, that it was “…too fine a home for crows”. The castle was never fully finished but it is reputed that the family were in residence until 1641. On the construction of the battlements the English Privy Council ordered that the work be stopped.

At one time the castle was known as Carrig-na-Shane-Saor, the Rock of John the Mason, and it is reputed that it was built by seven stonemasons all called John.

Tradition holds that there is blood in the mortar. This has been taken to mean that many died in the building of the castle. Some say that passers by were recruited to work on the castle and once the slave labourers had dropped dead of exhaustion their bodies were disposed of within the castle walls.

Much as these tales conjure dramatic and terrifying history, it is possible that “blood in the mortar” can be taken quite literally as a reference to the tradition of strengthening lime by the addition of animal blood.

In 1632 the McCarthy’s were in financial difficulty due to their involvement in various rebellions and the expenditures on the castle and so a mortgage was granted by the Percivals, the Earls of Edgmont. In 1666 the castle and several thousand acres of land passed into the hands of the Earls of Edgmont, the final figure owing on the mortgage was £2500. The castle was given to the National Trust of England by the Edgmonts in 1900 and its ownership returned to Ireland in 1998.