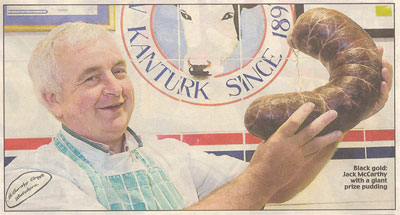 If revenge is a dish best taken cold, it’s been worth the wait to put one over on the French. After the disenchantment of Thierry Henry’s “hand of fate” the nation can finally take a degree of vengeance having nabbed a gold medal from under the noses of the gauls.

“Seriously though, it was really about making the pudding in a contemporary style, but still maintaining the integrity.”

“This gathering at Montagne au Perche is really the best of the best,” says Jack. “It’s a place where the French truly genuflect at a tradition that dates back centuries. And while we might question their attitude to fair play in soccer, there’s no doubting the high esteem they hold their food in.”

During the week long festival, gastronomic stalls dot the town squares, whilst specialist butchers demonstrate the art and mysteries of sublime black pudding creation. Up to 10km of the delicacy is consumed by the eager multitudes during the week, and prizes are awarded for Best Black Pudding Eater and Best Pig Squeal.

In France, boudin noir varies from region to region but generally has apples, onions and mashed potatoes as a filler. “We found the reception to our product extremely good out there,” says Jack. “They have even indicated they would like to bring the competition to Ireland, which would be enormous and we are encouraging them in that direction.”

With a history dating back to ancient Rome, Black Pudding has its variations across the world from the Netherlands’ bloedworst to Italy’s buristo and Finland’s mustamakkara. Even South America has its moreilla, where the blood is mixed with rice and spices.

“It came from the times when waste was not an option, when all parts of the animal had a nutritious use. Nowadays, wer’re throwing away half the animal – and we wonder why things are the way they are.”

“We need to learn how to sell what we have to the world, and our food is top of that list,” he believes. “A golfer, for example, will come to Ireland and venture on the course once a day – but he has to eat three times a day.

“I often look in restaurant windows on my travels around the country, and I remember well the day I saw ads for American-style rins in one place, Mediterranean – style prawns in another and Cajun-style chicken in a third. In the name of God, where is Ireland in all this? Have we forgotten what we have to sell here?”

But while the world has a proven appetite for all things Irish, much of our economic renaissance will rest on the quality of salesmanship employed to push the product, he feels.

“I travel all over the world to trade fairs with Good Food Ireland and I see some poor creatures on stalls who wouldn’t be able to sell ince-cream in the desert. You can have the best product in the world but you still need to know how to sell it.”

So what’s the McCarthy secret? Well on top of the traditional curing techniques, innovative spice combinations, and delicious smokes and Irish Whiskey employed to impart unique flavours and tenderness to their wide range of products, the McCarthys’ emphasise their free range pigs as a fundamental ingredient in their success.

“Sadly, scenes like this are a rare occurrence for the majority of pigs farmed intensively. Our pigs enjoy wide open spaces to dig and play in the open air, to exercise and maintain a natural diet. The good life they lead is the essential ingredient that makes our puddings what they are,” he says with obvious pride.