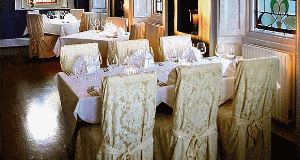 THOUGH, obviously enough, The Old Convent was once a nunnery it is an alpha-male building radiating authority through its assertive, almost garrison-like lines and magnificent stone facade.

It was built when Catholicism was a certainty rather than a choice. The depth of the conviction behind the building shouts out still, long after the nuns have gone. It does not do doubt, it does not waver and there’s no room for even a shard of ambiguity.

And if you’re prepared to make an imaginative leap the same can be said of the wonderful, earthy-rich food presented by Dermot and Christine Gannon.

Like Catholicism of old, it is an absolute package, a take-it-or-leave deal because The Old Convent does not do choice — the house usually offers only a tasting menu. Just as the Catholic hierarchy of old-fought à la carte Catholicism, the Gannons are confident enough to offer a set menu, one not revealed until you arrive.

In our case — DW and I — we enjoyed it thoroughly, even if we did not realise we were to be so constrained as the house style was not explained when I made our booking. Neither did it seem to deter other guests — we had to book several weeks in advance to get a Saturday night table.

Nevertheless, if you are prepared to surrender the dubious pleasure of 10 minutes puzzling your way through a menu, the eight dainty courses were a real pleasure and two, if not three, were exceptional.

Engagements opened with a dessert spoon of duck liver and bantam egg mousse with smoked-duck lardons apple syrup all presented in a decapitated eggshell. It was a velvet-smooth, deeply-rich tasting morsel arranged with care and humour.

The next course, for me at least, screamed more, more and still more. It was in essence, a hint of what might be, as enjoyable a main course as it might have been my pleasure to discover.

It was, and the “it” was hardly a golf-ball-and-a-half in size, slow-cooked Ballinwillan rare breed pork with Cashel blue cheese, pears and candied almonds. It was as impressive a pork-and-fruit combination as I’ve come across and, like a glimpse of heaven, its fleeting pleasure was as frustrating as it was satisfying. Nevertheless it was a truly exceptional combination of textures and tastes.

The next dish — a coffee cup of cauliflower veloute — was dull and the least impressive of the evening.

It was followed by buttermilk poached organic salmon, baked crab, sushi rice, elderflower and pineapple salad. Though impressive enough it was the dish that tried too hard and probably best showed the difference between a tasting menu dish and a dish from an à la carte menu. The essences of the perfectly good ingredients were almost lost in the tasting menu imperative to push the boat out.

Next was a wonderful apple sorbet with raspberry jelly. This is a simple dish that can say more about a kitchen than many others. Here, in contrast to its predecessor, was a victory for the kind directness that underpins great cooking. It was truly exceptional.

So, too, was the next course. Heifer beef, truffled white cocoa beans, wild mushrooms, triple cooked potatoes and veal jus. The beef — flagged as Jack McCarthy’s dry aged — was pretty much as close to perfect as anyone could ask for. It had depth of taste, a tender texture and was cooked in a way that completely honoured the entire process. A third exceptional dish in one evening.

This was followed by two more courses — a lemon posset and a Valrhona dark chocolate pot — and both were really good. Our wine, Condado de Haza Ribera del Duero Tinto 2007 from Ribera del Duero was excellent.

The Old Convent does food-and-accommodation packages and seems to be an ideal place for one of those short, re-energising winter breaks, and even if the weather can’t be guaranteed, it seems the quality of the food can be. And you’ll experience the legacy of the nuns who seem to have left a very calm karma in the building that enhances the whole experience.

Altogether wonderful food, served with style, in a lovely place.