This recipe is from the blog of Chef Bryce Collins, born in Northern Ireland, and who lived in the United States most of his life, serving in the U.S. Navy for 7 years. He recently repatriated back to Ireland to produce a new Culinary Comedy Musical Series, – P.R.A.C.T.I.C.E. 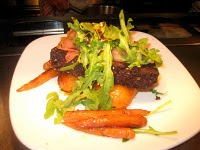 YOU WILL NEED:
Comice Pears, (One per dish), Not too ripe..
Cinnamon
1 cup sugar
Star Anise
2 Lemons
Cardamon
Rum
Irish Butter
Baby Carrots (3 or 4 per dish)
Cinnamon
Rosemary Chopped
Brown Sugar
Irish butter
Salt & Pepper to taste
Olive oil
Jack McCarthy’s Black Pudding {I used Kerry Style} – (If you’re close enough)
Parma Ham
Roquette
Malt Vinegar
Garlic (Finely Chopped)
_________________________________________________
1. Core and peel pears, and let them dry out in Fridge uncovered for a day so that they will dry out a bit and not disintegrate in the pan
2. On a hot pan add the sugar and be sure to spread it out over the pan evenly so it won’t burn in the corners.
3. Add 3 dollops of Irish butter and mix so the sugar won’t separate.
4. Add pears, Star Anise, Cinnamon, Cardamon to the pan.
5. Coat pears with the mix and add rum to flambé. Then add 2/3 of the juice of the lemons to bring down the sweetness of the mixture.
6. Remove pears and strain, set aside, Reserve liquid in a separate bowl.
7. In a separate pan, blanch the carrots in water with rosemary and cinnamon until soft. This can be done up to one day before hand and stored covered in the fridge.
8. Let water reduce or (place a few splashes of water) in the hot pan.
9. Roll carrots around in the pan while sprinkling cinnamon, brown sugar, and a dollop of butter.
10. Continue searing carrots, occasionally adding the brown sugar and butter to taste…
11. Remove the carrots and set aside…
12. Dump the excess of the pan, but don’t clean pan.
13. Season pudding with Salt and pepper
14. Add Olive oil to the hot pan that had the carrots on it.
15. Sear Jack McCarthy’s Award winning Black Pudding, 45 seconds each side. Remove from pan and dab.
16. Wrap the pudding in parma ham and return to fire for an additional 45 second each side and remove and dab
17. Season the Roquette with Salt & Pepper to taste along with the rest of the lemon & a light sprinkle of malt vinegar, and minced garlic.
18. Place pears on the bottom of the plate, then Jack McCarthy’s Award winning Black Pudding, slice and dress the carrots around and the roquette on top.
19. With the remaining juice from the flambé lightly drizzle and serve!
Garnish with Star Anise if you wish…